At what age should my kitten start eating dry food and soft food?

Below is a general schedule for kitten weaning:

What is the weaning process for my orphaned kitten?

When it’s at all possible, kittens should be exposed to some mother’s milk, especially within the first 12 to 24 hours of life. The first milk, or colostrum, contains antibodies that the kitten can only absorb during this time.

If a queen has an extremely large litter of kittens and cannot produce enough milk, each kitten should still get some of her milk. “Some milk is better than no milk,” says Dr. Jules Benson, vice president of veterinary services at Petplan. If she cannot produce any milk due to mastitis or other issues, another nursing mother may accept the kittens if they are close to the size of her own.

If no nursing cat is available, you can feed a kitten milk replacement formula with a nursing bottle or syringe.

You’ll be bottle feeding or syringe for three to four weeks. Always warm the bottle in a cup of hot water and taste test it yourself to check the temperature and that it hasn’t soured. If you’re using a powder formula, store unmixed powder in the freezer.

Feed slowly but frequently: every two to three hours during the day. At night, don’t worry about it; they’ll wake you when they’re hungry. If they’re sleeping, let them sleep, and get some sleep yourself.

WHEN TO WEAN KITTENS

Normally, the kitten weaning process begins at about four weeks of age. “With mom, they’ll start to try to eat her food, and she’ll push them away from her,” says Benson. But if you’re weaning a kitten that has been orphaned, you can start a little earlier, between three and four weeks.

“When they start biting and chewing on the bottle, they’re ready,” says Benson. At this point, you can start to introduce kitten food.

HOW TO WEAN KITTENS

To begin weaning a kitten, mix the kitten food with formula so they recognize the taste. Smear the mixture around their mouth with your finger and let them lick it off. Once they get used to the taste, they’ll seek it out elsewhere. Then you can introduce them to lapping from a bowl. Monitor them so they don’t lap too fast, and never push their face into the bowl, which could cause them to inhale the mixture and develop pneumonia.

Between the fourth and sixth week, gradually transition the weaning kittens to dry food, supplementing with formula if needed. Use canned food or dry kitten food mixed with water; at first, add a lot of water, and then reduce the amount of water as the kitten matures.


At what age should I spay / neuter my kitten?

As long as your kitten is at least eight weeks of age and weighs at least two pounds, they are ready for surgery. Pediatric spaying and neutering is widely accepted. Those ideas about needing to wait are antiquated and the evidence is to the contrary. Even the American Veterinary Medical Association supports early spaying and neutering.


Why should I have my kitten spayed / neutered?

Shelter euthanasia is the number one killer of companion animals. Spaying and neutering is the only way to reduce or eliminate that. Most places are overrun with kittens. There are millions of cats and kittens that need homes and millions more that are abandoned. There simply aren't enough homes for the cats that are born every kitten season. It’s also better for your pet’s health. And having a cat that’s spayed or neutered will make your life easier.


Do you have any information regarding teething and kittens? 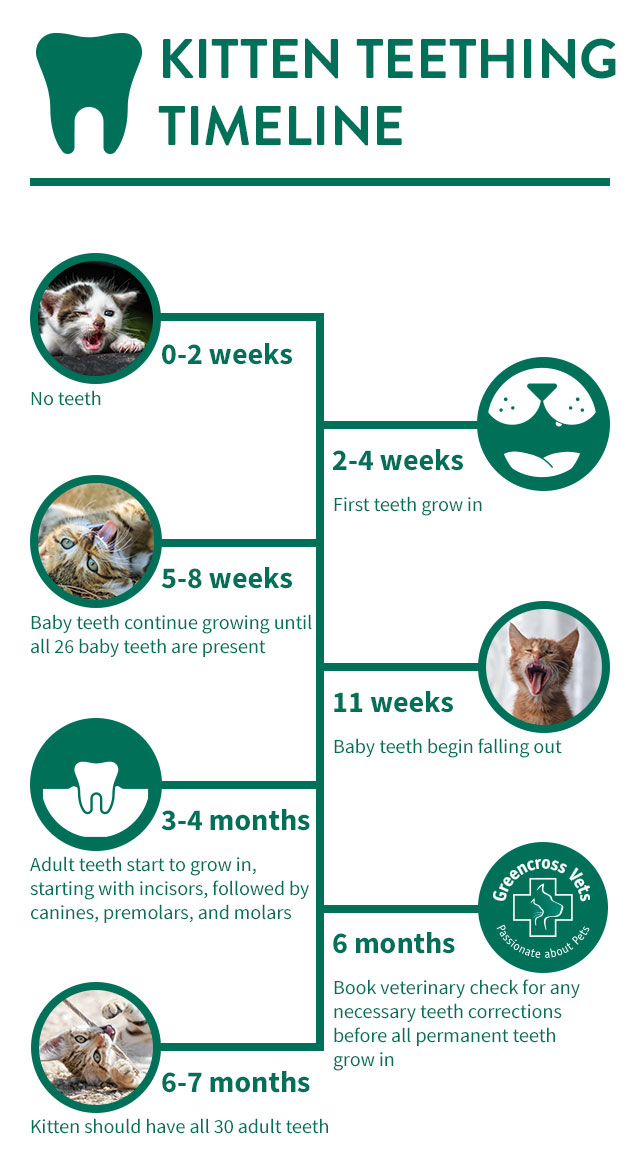 If my kitten is 12 weeks old, how does that compare to her age in human years?


At what age should my kitten begin to show interest in the litterbox?


How can I tell how old my kitten is?